“The odds are never in her favor. Good thing this mage doesn’t play by the rules.”

With a tagline like that, you know Ember Wright is about to throw down and kick some asses!

The latest installment–and Season One finale–of our Ascending Mage series is coming out on Sunday, September 22, 2019. You can order it now in paperback form, or pre-order the ebook and it’ll get delivered to your device after midnight on Sunday.

Just don’t expect to get any sleep when you start reading it! 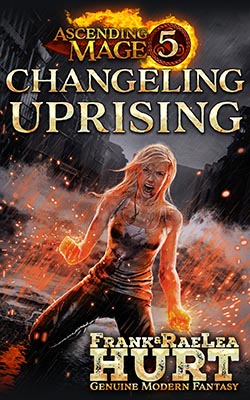 The odds are never in her favor. Good thing this mage doesn’t play by the rules.

She once passed as an obedient servant. Now, Senior Investigator Ember Wright shines a light on corruption wherever she finds it.

With a target painted on her back and on anyone who dares help her, Ember leads a global uprising. When her changeling friends get caught in the crossfire, she learns the true cost of freedom.

Win or lose, she stands for justice against the oppressors. She doesn’t stand alone.

Ascending Mage 5: Changeling Uprising is page-burning modern fantasy with a kick-ass heroine and magic that will grab you by the throat.