Did you know: typically fewer than 1% of readers bother to leave a review on Amazon?

Writing a review is easier than you might think, and it helps potential readers decide whether or not to pick up our books.

If you’ve read any of our stories and would be willing to take two minutes to leave a review, we would be very grateful!

And now, we have a convenient Review Landing Page which sends you directly to the review form on Amazon (they’ll ask you to log in).

Thanks for reviewing our books!

Ghosts may be frightening, but they aren’t dangerous to the living. Right? 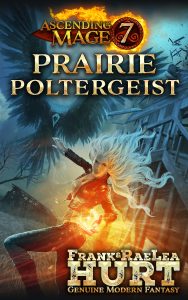 Ascending Mage 7: Prairie Poltergeist is scheduled for release on February 20, 2020.

Description and pre-order details are now available on the Ascending Mage 7 product page.

Have you ever wished you could drink from the skull of your enemy?

But how about drinking coffee (or your breakfast beer–we don’t judge) from a classy ceramic mug featuring artwork from your favorite urban fantasy series?

Our new swag shop features mugs of different sizes and styles, each emblazoned with cover art from Fog Over Mandaree and each of the Ascending Mage novels (thus far).

Go on, check out the new swag shop!

Your ears are in for a treat!

It hasn’t been to the production engineer for fine-tuning yet, but we wanted to share a sneak peek with you.

Here’s the raw recording for Chapter One of Ascending Mage 1:

Isn’t she amazing? We’re so excited to add audiobooks to our lineup for those folks who prefer to read with their ears.

We’re expecting to have this first audiobook ready for release in early November.

Excuse us a moment as we squeal excitedly. There might even be some celebratory war horn blowing happening today.

Q: Why the silly catfacery?

A: Another milestone has been reached here at our nascent publishing venture: we’ve hit 10,000 books sold!

It’s taken us seven months and five novels to hit that mark, mind you, so it’s not like we’re anything special. We’re well aware there are plenty of authors selling ten times that with one title, in much shorter time.

Nevertheless, we’re delighted to reach so many readers! 😊

A big key to reaching this milestone has been read-through from Ascending Mage 1 through the rest of the series (thus far; we’re outlining for 10 books in the Ascending Mage series).

Crunching the numbers, we’re able to determine that two-thirds of the folks who buy the ebook version of Ascending Mage 1 will go on to read the next book in the series. That ratio rises to 72% for those reading in Kindle Unlimited. We’re guessing that’s simply because the barrier is lower; with their monthly subscription it costs nothing to continue reading the next book, so there’s no purchase decision to be made.

And 71% of those who read Ascending Mage 2 go on to read AM3. That number surges to 91.66% among KU readers. That’s a pretty decent read-through rate!

It’ll be interesting to see how audiobooks fit into the pie when we start releasing those (which are currently in production). 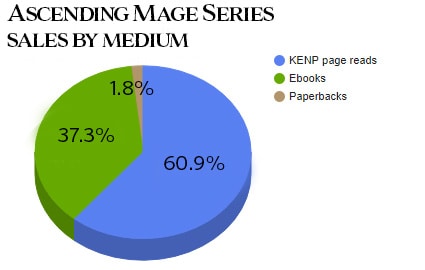 As best we can figure, we’ve sold books in 12 different countries. Some of those countries—such as New Zealand and Christmas Island—are sold via Amazon’s Australia store; we only know that we have readers there because they reached out to us. In fact, one of our Alpha Team members is from New Zealand!

It’s pretty wild to know that our stories are being read literally on the opposite side of the planet from our home state of North Dakota.

All of this has happened because of YOU, our loyal readership. Our readers continue to inspire us to keep pushing forward.

Ten thousand times over: THANK YOU for reading and reviewing our stories!